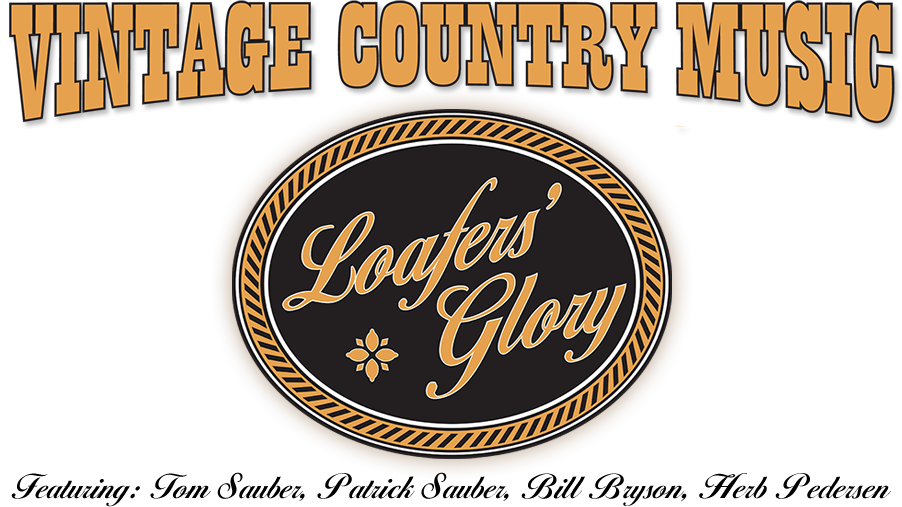 With the ever advancing technology in the music process, it’s refreshing to know that one band on the music scene is more into the development of good solid live performances than the pyrotechnics that go with today’s new look at country music and its by-products. Southern California has long been a haven for interested parties trying to find good live bluegrass, folk and blues. In the winter of February 2010, four players decided to form a new group with a direction combining the best of old-time and bluegrass music. These brave hearts have been playing acoustic music for the better part of 45 years, and found that this is indeed the time for another highly skilled acoustic band… Loafers’ Glory.

Bill Bryson has, over the past 40 odd years, loaned his talents to some of the best bands in the business. He’s not only a great upright bass player, but also an accomplished old time banjo player and an amazing singer/songwriter. Oh, and he’s pretty funny too. Bill has recorded and does record with many great talents.

Herb Pedersen has been involved with bands like The Dillards, The Country Gazette, Old & In The Grey, Chris Hillman with Tony & Larry Rice, Here Today, and Vern & Ray. He also played with The Foggy Mountain Boys for a time, subbing for Earl Scruggs back in the late 60s. Herb also writes an occasional tune when needed.

Tom Sauber has been in the forefront of the traditional old-time music scene for more years than he cares to admit. An accomplished fiddle and 5-string banjo player, he has appeared on countless recording projects and movie soundtracks, and has a healthy teaching schedule to boot. Tom’s love of the music has brightened up many sessions and performances with people like Alice Gerrard, Mike Seeger, Dirk Powell and Mark Graham.

Patrick Sauber, Tom’s son, came to essentially the same musical background as his dad. He’s one of those astounding multi-instrumentalists who feels as at home on the 5-string as he does on the mandolin and guitar. Patrick works occasionally with Laurie Lewis, the Bladerunners and now with Loafers’ Glory, adding a punch musically & vocally that everybody’s talking about.